Everything to Know About Tyr - The War God 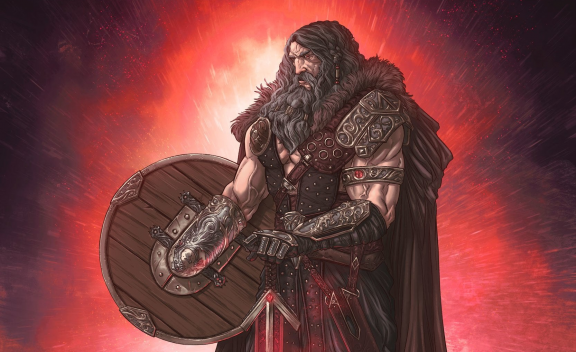 Tyr was the god of war and the son of Odin. As a god, Tyr plays an important part in Norse mythology. He was attributed to law and heroic glory and had respect for authority.

Tyr’s origin and patronage are shrouded in mystery since no one fully understands where he came from. There are few records detailing this and the many theories surrounding him are sometimes contradictory because they appear in different eras. Poor recordkeeping also makes it harder for historians to piece together his origin.

One theory claims that he was the son of Odin and a close brother to Thor. Another one mentions etin Hymir as his father with an unnamed mother. Other theories state that Odin was actually younger than Tyr. It is unclear whether this makes Tyr the father of Odin or the son of Odin but younger than Odin at the same time. While this might not make sense, it did in Asgard.

The Tyr Norse Mythology starts off before the Viking Age where Tyr was more important and seen as the chief of gods. The name Tyr can be traced back to the Proto-Indo-European god “Dyeus,” meaning god. The word is related to Deus which refers to the Christian God and the Greek Zeus, the head of his pantheon.

With time, and as the Viking age came to be, Odin and Thor started to gain more popularity and importance. This was, perhaps, because the values that most Vikings respected changed with time. In the Old Norse era, values such as hour, justice, law and oath keeping were seen as important.

However, as the Vikings started to grow during an era called the Migration Age. They started to value battle characteristics more hence the need to popularize Odin and his son Thor. After all, the Vikings were relentless and fearless warriors who travelled to distant lands to pillage and fight battles.

It is no surprise, therefore, that they would want to invoke the names of gods who gave them strength and courage in battle. This does not necessarily mean that Tyr was not interested in war. He was a capable warrior but since Odin shared his role as the god of war, it was only natural for Vikings to place more importance on him and his son.

More than just a "God of War"

Tyr was indeed more than just a god of war. He was also a divine jurist who worked hard to uphold law and justice. He was also ready to sacrifice himself to ensure that the law was not only upheld, but Asgard was kept safe.

His jurist nature was perfectly demonstrated in the tale of "The Binding of Fenrir". Fenrir was one of Loki’s three children with the giantess Angrboða. He was the brother to Hel and the serpent Jörmungandr. The three children were not only hideous, but they were also dangerous so much such that the gods traced terrible prophecies concerning the three. This made the gods uneasy and fearful.

In order to avoid the mischief and terrible harm away, the gods decided to keep the three children away from Asgard.  Jörmungandr was thrown into the sea where he grew long enough to surround Midgard (earth) while Hel was given dominion over the underworld. She was given power over the nine worlds and allowed to receive the dead in the underworld.

Fenrir, on the other hand, was too dangerous for the gods to let go. He was growing too fast too strong. it would be a terrible idea to let him roam free.

When the gods realized that nothing could hold him, they sent word to the realm of the dwarves called Svartalfheim. The dwarves were the most talented and skilled craftspeople in the cosmos. They were responsible for making weapons that the gods used in their wars. For example, they were responsible for making Thor’s hammer and the ring called Draupnir.

The gods wanted a chain that could bind Fenrir. This, they did by building a chain from the sound of a cat’s footsteps, the beard of a woman, the roots of mountains, the breath of a fish, and the spittle of a bird. These items did not exist which made it futile to struggle and the chain was called Gleipnir. Gleipnir means open.

The dwarves then sent the chain to the gods who, in turn, presented the chain to Fenrir. Fenrir grew suspicious when he realized that the chain was lighter and supple than any other chain they had used before. He refused to be bound by it unless one of the gods sacrificed themselves and put his hand in Fenrir’s mouth as a show of good faith.

The gods could not take the risk. They knew that they would definitely lose their hand for breaking the oath. Tyr was brave enough to put his hand into the beast’s mouth if it meant putting him away to save the rest. They bound Fenrir and when he realized that he could not break free, he chopped of Fenrir’s hand.

The wolf was then taken to a lonely and desolated place where it was left with its chain tied around a boulder and a sword placed in its jaws to keep it open. Fenrir howled tirelessly, and a foam river called expectations flowed from his mouth. And he would remain there until Ragnarok.

For Tyr, this was the ultimate sacrifice. Losing an arm to do what was right not only saved the rest of the gods from the rapidly growing and dangerous beast, but he also ensured that the law was not broken. This is similar to Odin’s act of sacrificing his eye for the good of everyone else. By his action, Tyr showed himself to be the foremost god of law.