What You Need To Know About Thor - The God of Thunder 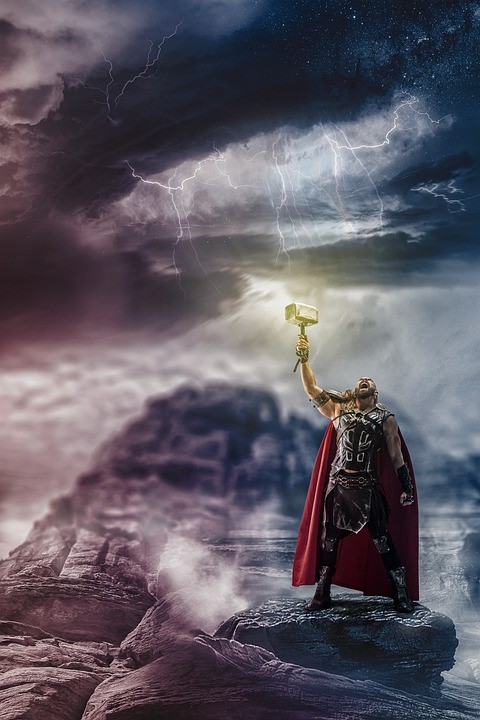 Thor is the son of Odin and defender of Asgard, the realm of the gods and Midgard the realm of humans. He was a powerful god who was well respected and feared for his aversion to evil and his ability to fight for what was right.

Thor’s upbringing was surrounded by many siblings. He had many brothers thanks to his father, Odin the chief of the gods. They were called the sons of Odin. The most popular sons of Odin and brothers to Thor were Baldr, Víðarr and Váli.

He had two servants Þjálfi and Röskva and always rode in a chariot pulled by two goats, Tanngrisnir and Tanngnjóstr.

There are three powerful symbols associated with Thor. He always wielded his powerful hammer known as Mjollnir or Thor’s hammer that had enough power to crush Mountains.  He had a belt called Megingjörð that was supposed to give him power and strength while his iron gloves called Járngreipr were supposed to help him handle the powerful hammer.

Of all the Norse gods, Thor is perhaps one of the most respected and loved by humankind. As a god, his work was to protect both the world of the gods and that of humankind. He was also the god of fertility and agriculture and was often called upon to bless or hallow weddings with his hammer.

Thor was often depicted as a monster slayer who was always on a quest to kill monsters who wanted to destroy Midgard. His feats of killing monsters were usually great. Thor’s work as a protector did not have any downtimes. There was always a monster plotting to attack Midgard or Asgard and Thor was always ready to fight them.

One of his most popular wars was with Jörmungandr a serpent known as the Midgard (earth) serpent that resided in the sea and was as a result of the union between Loki and Angrboða. The snake was called Midgard serpent because once it was thrown it the sea, it grew big enough to surround the earth such that is head met its tail. Stories abound of evil beings trying to trick him using the Jörmungandr and how he lost his chance to kill the snake.

He had an unshakeable sense of duty and courage and would always toss himself right in the middle of the most dangerous situation if it meant killing a monster that would destroy the world.

As a god of Fertility and Agriculture

Thor was always called upon to bless the land before the planting season. As a sky god who was also associated with rain, it was believed that he was the best-suited god to ensure that there was a bountiful harvest.

Also, his golden-haired wife, Sif played a major role in these beliefs. It was believed that her golden hair was a symbol of fields of grain. Their marriage was termed as divine because it took place between the sky and the earth which symbolized a sexual union between the earth and the sky. Therefore, it guaranteed that the earth would remain fruitful and people would prosper.

Thor’s hammer could cause as much good as it could cause damage. To the wrong parties, Thor’s hammer had the power to crush. To human beings, he was known to use it to bless events, unions and the land.

Thor was always called upon to bless weddings and ensure that they remained fruitful. By destroying monsters and evil, the hammer inadvertently performed the act of hallowing. This is why it was common to call unto Thro to offer his blessings.

His most famous hallowing act, however, is attributed to his goats, Tanngrisnir and Tanngnjóstr. The goats had the power to resurrect every morning. He would eat them in the evening and collect their bones and hides. Then in the morning, he would bless the hides and bones with his hammer and they would come back to life. This only happened as long as the bones and hides remained undamaged.

Facts about Thor and Influence in Pop Culture

The god of thunder is perhaps one of the most famous Nordic gods in the world right now. While millions of people have little to no relationship with this mythical god, they have grown to love Thor from his depictions in modern times. These people have had the pleasure of interacting with this mythical being in different settings.

There is little confusion over why Thor is a popular god in modern times. Not only is he incredibly strong and handsome in all his depictions, but the sheer idea that someone could control a force as powerful as thunder is mind-blowing and intriguing.

This is why many people have named cities, towns, and even mountains after this powerful god. For example, there is a mountain called Mount Thors in Canada, Antarctica and Alaska. There is a Thor Fjord in Greenland and a volcano on Jupiter’s moon called Thor. The Chemical element Thorium was named after the god of thunder by a Swedish scientist in the 19th century.

His name features prominently around us. For example, the day Thursday was named after him as Thor’s day before it was later changed to Thursday as we know it. The Germans used the symbol of the swastika to represent Thor’s hammer. The swastika was believed to provide protection and was found on belts and swords.

In art, Thor’s features many times in modern artworks which have gain a lot of popularity. He is also featured in modern literature. The most common feature for Thor is his superhero movies by Marvel played by Chris Hemsworth.